We are entering a post-archeological situation, in which the narration that connects a fragment with its history needs to be questioned. Archeology is linked to the national mythologies and narrations of the nineteenth century. They constituted an identity based on the assumption of the existence of an historical timeline.
The Museums and later the exhibitions were the places, where isolated fragments or objects – were presented as carriers of extended meanings. Some objects in the museums could stand in for an entire epoch of history.
But without the framework and narration of the museum, the same object would just be an arbitrary object.
The question has been raised, if objects can be conceived as existing from a past into a future, but without being dated and inscribed in the present, into a historicity.
Archeology has always been starting it’s narration with fragments. It’s idea of history is linear. Some objects have made a jump in the archeological strata, for example when a vase from an earlier period has been excavated and then used again. Then the object is dated twice in an archeological sense.
The reality from the point of view of the object is not historical, rather it always exists in the here and now and all meanings and historical narrations are imposed from the outside. This conception of the object as existing in it’s own time, proposes a way to perceive a fragment as an object with different possible historical ties, in which the object itself allows the questioning of all these narrations. 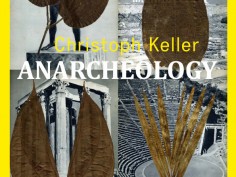