Everyday I sit outside hoping that today could be the day.

But for now all that remains are the chains of the machines, the stream of images, the desire to immerse oneself, the feeling of loneliness and emptiness in this live performance of my sharing and being shared.

X: Why do you think this guy always buys that same exact beer?

Y: It’s quite a cheap one I guess.

X: I wouldn’t buy that, the design of the can looks disgusting.

Y: Yes but It’s one of those you can buy the big 24 packs at Denner.

Y: Yeah, but they all are at about the same price level.

(Noise in the background of old men playing pétanque)

X: That’s a funny way to put it.
So it was actually just alcohol that he wanted, water wouldn’t have cured the cause.

That’s maybe why he didn’t care what the beer tasted like because either way he always bought the cheapest one. And after the first 2 or 3 you won’t know the difference anyway.

(Birds singing in the distance)

X: But what I don’t get is, why he did it that way?
Since for him the important part was to drink alcohol, it was something he enjoyed, a habit that was part of his everyday life. He must have made a choice at some point, consciously or unconsciously.
Why did he choose to drink the cheapest beer?

Y: I think because he calculated how much his consumption would cost him annually and he then found this the most appealing to choose the cheapest one.

X: But I always thought that when you care about something you develop a kind of interest for it. Like when I’m passionate or obsessed with something, I always tend to go with what I deeply enjoy. It’s not like he wasn’t working, he was financially stable. He had all options.

Y: Yeah but he’s not that kind of person. All the other options would have been irrational
for him.

But of course there are many people who have a different approach when it comes to alcoholism.
For example the ones who buy a lot of expensive wine and then drink even more of that expensive wine so that they can keep buying more and more.
And all with the excuse that it’s about the taste, that it’s a hobby or even better an investment.

X: Yeah that’s more how my father deals with his alcoholism, he doesn’t want to face it.
He’s not very honest with himself in that way.

Y: Maybe one could then say that buying the cheapest beer is the most honest approach to alcoholism.

Y: I would just go for vodka and water, I think there you have the best money/alcohol ratio.

X: Yeah but it’s a question of preferences. Plus drinking a bottle of vodka everyday isn’t really a thing in our culture, maybe in Russia you could do that.

Y: Yeah maybe, actually I have no clue how much beer one drinks in Russia.

X: Yeah me neither.

As he fell asleep and the artificial birds kept singing, the internet had won again.

But maybe tomorrow is the day, the day that finally something real will happen again. 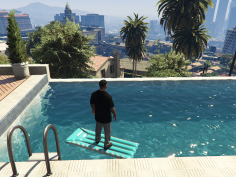