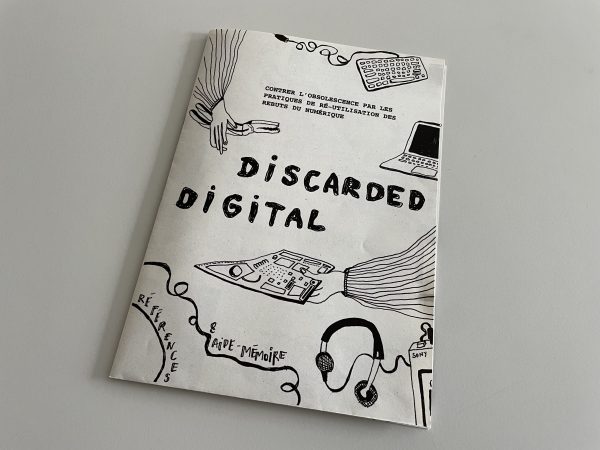 The project started two months ago, and we’re slowly figuring out how to communicate about our activities. Along with this blog, we chose to produce short “research bulletins” that describe various issues such as research methods, analytical and vernacular idioms as well as ideas we had. Anaïs put together the first bulletin, that you can find over Bulletin number 1 (pdf).

“Hacking” electronic toys isn’t homogeneous, as attested by these two examples, taken from (1) Game Boy Modding (a boo about to modify GameBoys) by Greg Farrell, (2) A fanzine by T.A.C.O. Team about toys hacking. 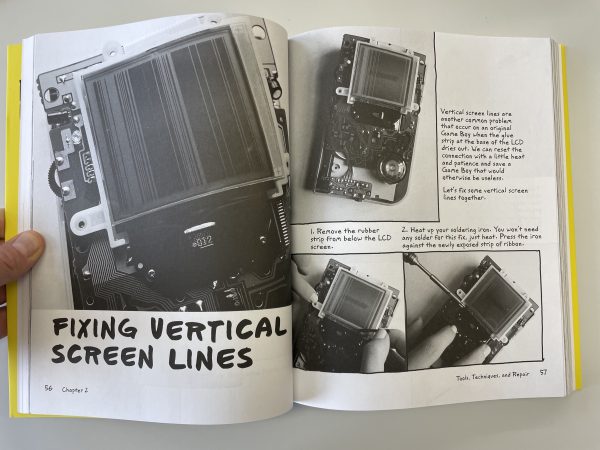 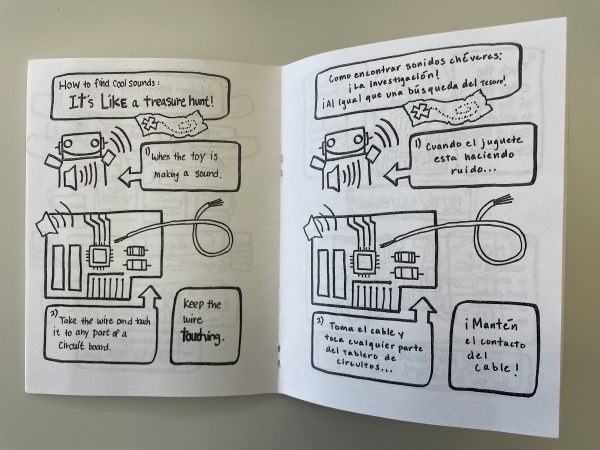 While the formats of the two documents are close (using drawings and informal ways of describing things), there is a clear different between the level of precision in the first book, and the second, which is clearly more playful (“take the wire and touch ANY part of a circuit board”). Perhaps this is caused by the purpose of the first book, which is more about maintaining/fixing the device, and less about fucking around with it. 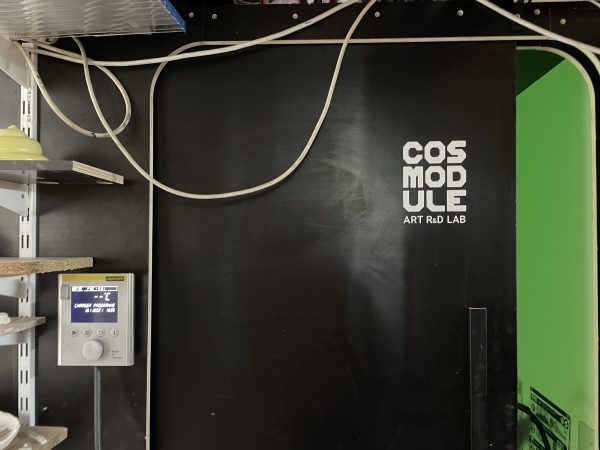 Had a chance to visit the Cosmodule Art R&D Lab in Lyon yesterday. Not strictly focused on recycling electronics, but still highly interesting in the way some of their projects deal with old consoles, use video game spare parts (such as buttons, lights and motherboards) – both as an inspiration for creative projects, and as material to be re-used in their serigraphy projects. 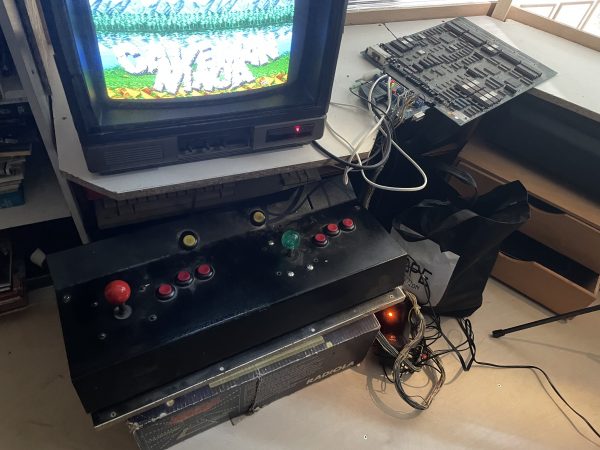 See for instance their Flippaper project, and, closer to our research project, this kind of interface (under which a book by Gaston Bachelard is surrounded by Teenage Muntant Ninja Turtles figurines, neon-lightings and stacks of drawings of spaceships inspired by Buckminster Fuller’s work): 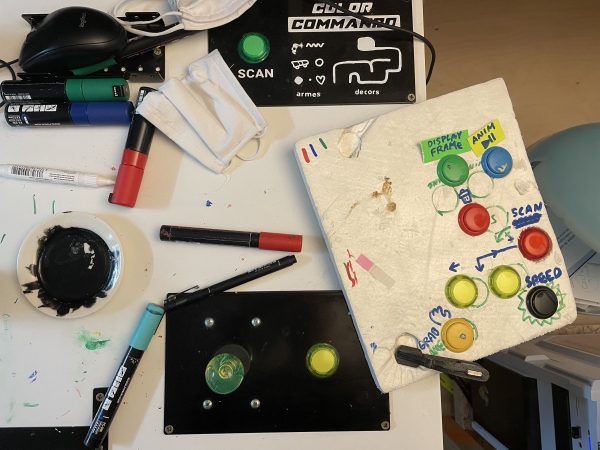 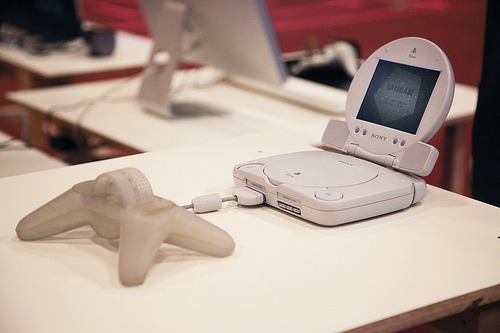 In the latest instalment of his newsletter, Robin Sloane mentions the notion of “permacomputing”:

There’s an idea simmering out there, still fringe, coaxed forward by a network of artists and hobbyists: it’s called “permacomputing” and it asks the question, what would computers look like if they were really engineered to last, on serious time scales? You already know the answers! They’d use less power; they’d be hardy against the elements; they’d be repairable — that’s crucial — and they’d be comprehensible. The whole stack, from the hardware to the boot loader to the OS (if there is one) to the application, would be something that a person could hold in their head.

Further down his text, he describes how such kind of permacomputing may exist concretely on recycled electronics:

The sailing/computing duo Hundred Rabbits are pilgrim-poets of permacomputing. Their Uxn project is a clever 8-bit computer design that can be built or emulated in a variety of ways, including on old, recycled hardware.

Garbage Watch is a wristwatch “built from the tech the world threw away in the trash”. “Launching in 2022, the waiting list is now open”.

The Guardian has a piece about new games designed for consoles of the past. And more specifically, about this wave of new games released on “old-school cartridges”.

As usual with this kind of piece, the topic of “authenticity” is mentioned, as a motivation. More interestingly, the “unexpected cool factor of physical media” is also highlighted, as well as the difficulty in producing these games.

Listening to a talk by Melanie Swalwell about her recent book called “Homebrew Gaming and the Beginnings of Vernacular Digitality”. Her definition of homebrew game characteristics are quite relevant to us in the project, as they clarify what it corresponds to: 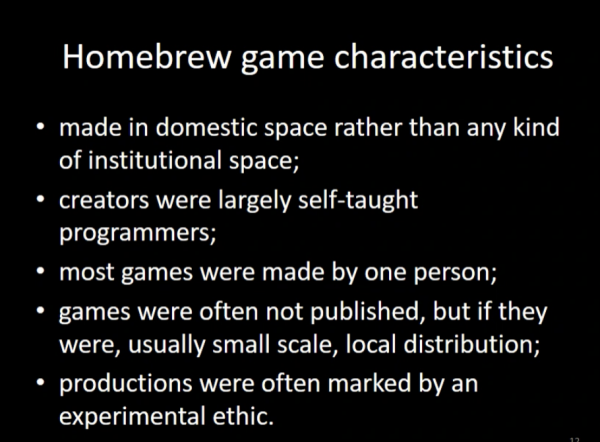 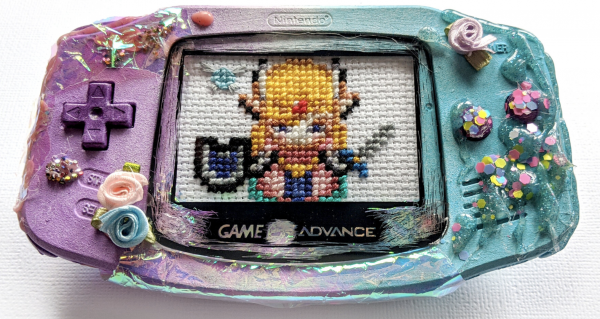 Game ? Advance, by Alex Custodio, is an inspiring project that repurposes digital artefacts through sculpture. The aim is both to provide a critique of “how hardware and software reproduce dominant ideologies around gender and power”, and to imagine an alternative history for Nintendo’s handheld. Alex Custodio addresses the following questions “What does it mean to de- or re-gender a Game Boy Advance? How do we reconcile old technologies to move towards a better future that welcomes a broad range of subjectivities?”.

Anaëlle’s thesis addresses “the obsolescence of technology through the lens of accessibility to public services”. Her design work explores “the ageing processes of electronic devices in regards to a technological normativity that marginalizes owners of obsolete devices.” Check the PDF here.