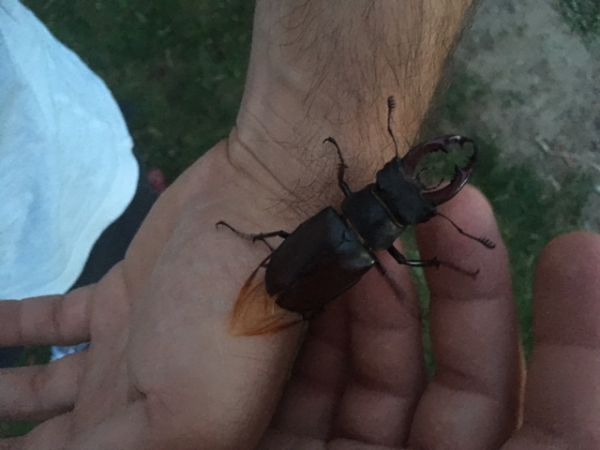 The Lucanus cervus is the most widely known species of stag beetle in Switzerland and the rest of Central and Western Europe. The species is listed as “near threatened” on the International Union for the Conservation of Nature’s Red List. The lucanus cervus, like most beetles, builds nests and lays its eggs in the hollowed-out trunks of old and dead trees, and feasts upon dead and dying wood. Deforestation across Europe, as well as practices of clearing out dead trees from forests, has thus greatly reduced its habitat; its slow-moving nature also means that the lucanus cervus struggles to relocate to new areas once its habitual home is destroyed. Though relatively more widespread in the southern parts of Switzerland (Geneva, Ticino, and Valais), the lucanus cervus is dwindling in the north of the country and appears in Appendix III of the Bern Convention on the Conservation of European Wildlife and Natural Habitats. Since 2001, under federal order, commissioned research has examined and evaluated the current distribution and population strength of wood-eating beetles throughout Switzerland. In 2011, the Swiss Office Fédéral de l’Environnement published a list of priority species deemed “umbrella species” due to the large number of other species associated with them; the lucanus cervus was included on this priority list. Since then, the canton of Geneva has implemented an action plan for the protection of the lucanus cervus and two other wood-eating beetles (the hermit beetle and the great capricorn beetle) whose steps include: management and maintenance of old trees; creation of cross-border corridors, and spaces in forested areas where wood is left to age and rot; creation of insect hotels; the management and creation of tree hedges; and the resumption of traditional agroforestry practices in some forested areas.