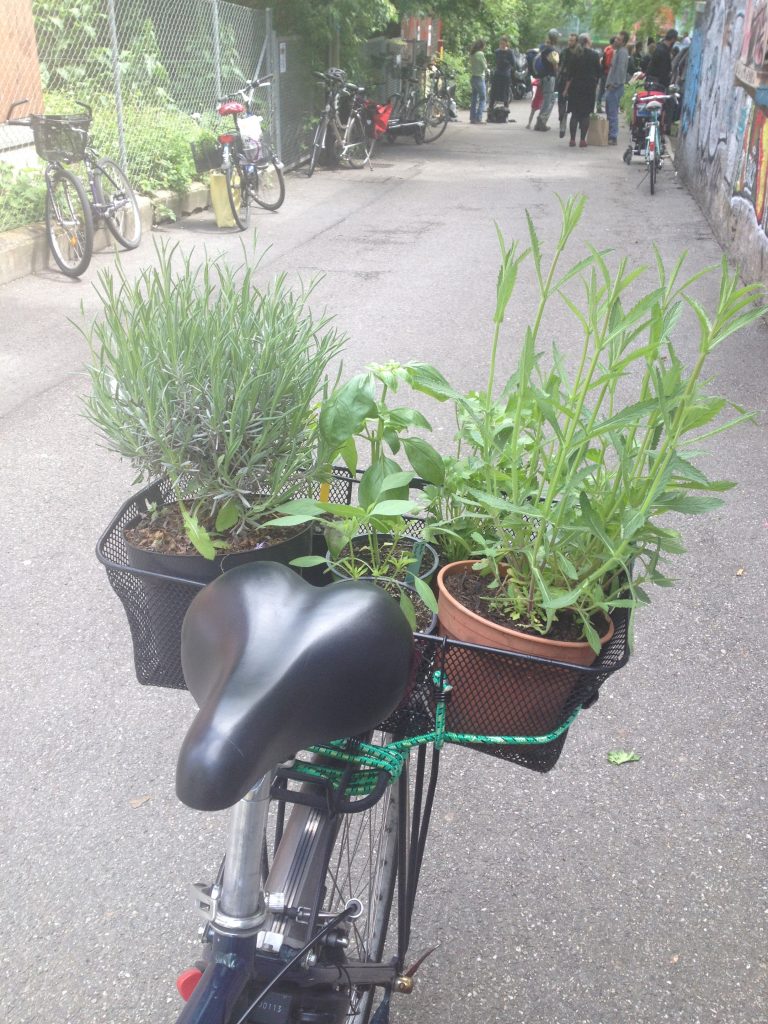 Throughout Switzerland, there is an abundance of a certain kind of garden space known as jardins familiaux (“family gardens”), identifiable by neat rows of wooden cabins, sometimes large enough to be confused with small houses, and adjoining garden plots separated by fencing. Often, the users of these garden plots do not live nearby, but rather have to make a special trip in order to check on their plants or have a barbecue, making these community gardens a miniature version of weekend getaways. By contrast, in French-speaking Switzerland, the potager urbain, or “vegetable garden,” is “used more and more in public debates to designate a new form of garden, located near residences, with smaller surface areas and no cabins.” (Frauenfelder, Delay & Scalambrin 2014: 67). Though often divided into individually assigned plots, members of urban gardens in Geneva are not separated by fencing and therefore will regularly come face to face with each other, resulting in the sharing of trowels, watering cans, pieces of advice (solicited or otherwise), seeds and seedlings, stories, gossip, political views, complaints, concerns, thinly veiled looks of disapproval, recipes for what to do with too much red chicory, and offers to help with the watering while you’re away on vacation. Such gardens are generally installed in unused parcels of land and may be as small as a handful of raised planters in the middle of a concrete courtyard, or as large as several hundred meters squared of earth. Geneva has a long-running culture of gardening in the urban milieu that began with the arrival of French Protestant refugees following the revocation of the Edict of Nantes in the seventeenth century. Many of the refugees brought seeds with them, and a culture of market gardening grew up in the area of Plainpalais. Urban gardening in Geneva can also trace its history to the French priest Jules Auguste Lemire and his creation of jardins ouvriers (“workers’ gardens”) in the late 19th century, intended to improve the lives of working class people through social interaction and some measure of food sovereignty. (Mestdagh 2015) Modern urban gardens in the area, however, are a relatively more recent phenomenon, only appearing in Lausanne in the 1980s, with Geneva following suit. (Pasquier 2017) As of 2018 in the urban area of Geneva there exist well over a hundred projects registered with the city, including: twenty-seven collectively worked gardens, forty-two community gardens comprised of individual plots, nineteen gardens run by various institutions, five rooftop gardens, four urban farms, twelve beekeeping operations, four chicken coops, and one aquaponics operation (located behind Cornavin train station). A mapping of these gardens developed by the association Genève Cultive can be found here. Information on the administrative procedures to follow in starting (and possibly getting city funding for) an urban garden in Geneva can be found at here. (KS)

Image: Plants for an urban garden bought at the Galiffe plant sale (Marché aux Plantes de Galiffe), held every May in Geneva. Photographed by TAAG.