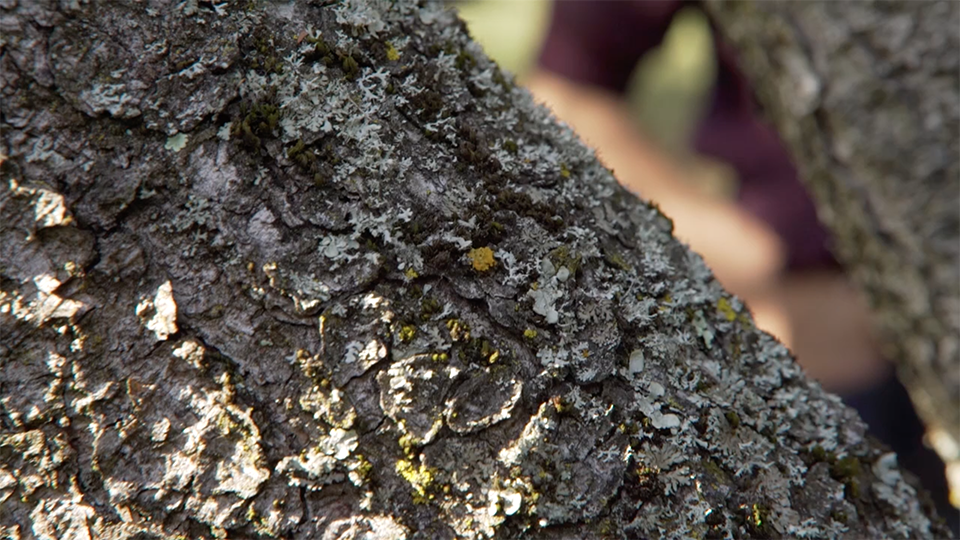 Our own cells are symbiotic cells. Two billion years ago some bacteria cells were eaten by the original cells that we are made of, and they are now our mitochondria. Symbiosis is really a successful process on Earth. It’s not competition that is important, but symbiosis, togetherness.

The symbiotic nature of lichen assemblages is stimulating discussion in multidisciplinary reflections on the Anthropocene. (See, for example, Gabrys 2018; Haraway 2016; Tsing, Swanson, Gan & Bubandt 2017.) Lichens, though they are classified within the fungal kingdom, named with a genus and species, and commonly spoken of as organisms, are really assemblages of organisms — symbiotic composites of filamentous fungi that house photosynthetic algae and multitudes of bacteria. These are ancient communities, though their fossil record is scarce due to the fact that common lichen habitats such as tundra and mountains turn up few fossils for research. (University of California n.d.) The earliest known fossilized lichen was found in Scotland and dates to the Early Devonian period, approximately 400 million years ago. A lichen community can be killed, but it also carries in it the potential for immortality as its network spreads. A lichen’s vegetative tissue, or thallus, grows outward in a circle unless blocked from doing so, with the older parts located at the center and the newer growth at the edges; the bacterial communities housed in the thallus are also older at the center than they are at the edges. (Pringle 2017: G165) “Lichens are ghosts that haunt us from the past, but they also peer at us from a future without us.” (Gan, Tsing, Swanson and Bubandt 2017: G9-G10) In a cityscape such as Geneva, lichens abound on old stone, especially gravitating to the walls and buildings of the Old Town and the older tombstones of city cemeteries. In an interview with TAAG, lichens specialist Philippe Clerc of the Geneva Botanical Gardens noted that lichen species which are normally adapted to warm, Mediterranean-like climates, are moving northward to Switzerland through the dispersal of spores in the wind. (KS)