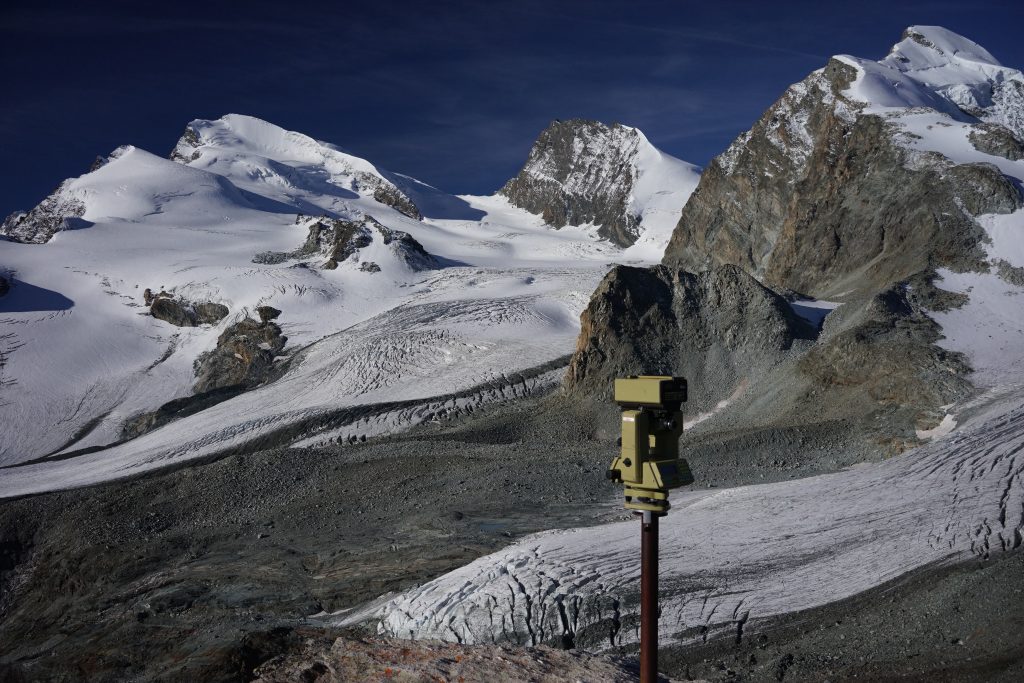 I remembered the effect that the view of the tremendous and ever-moving glacier had produced upon my mind when I first saw it. It had then filled me with a sublime ecstasy, that gave wings to the soul, and allowed it to soar from the obscure world to light and joy.

The glaciers of Switzerland are weeping away. Do these dwindling bodies of the alpine, like Walter Benjamin’s true image of the past, yet flare up in slow motion, at the very instant of their passing? Might each mass of disappearing ice shelter a singular energy, spirit, or even, as Brazilian anthropologist Eduardo Viveiros de Castro (2016) is teaching us to recognize, the soulful personality of an embodied point of view? Interpreting the “multinatural” perspectivism of Amerindian cosmologies, Viveiros de Castro describes “a universe inhabited by diverse types of actants or subjective agents, human or otherwise – gods, animals, the dead, plants, meteorological phenomena, and often objects or artifacts as well – equipped with the same general ensemble of perceptive, appetitive, and cognitive dispositions: with the same kind of soul.” (Viveiros de Castro 2016: 56) In Indigenous cosmology, he argues, it is the difference and multiplicity of bodies, rather than ostensible difference in mind-soul, that generates personhood and world-views: each kind of body entails a point of view and, therefore, all are potentially persons. “Personhood and perspectiveness – the capacity to occupy a point of view – is a question of degree, context and position rather than a property distinct to a specific species.” (Viveiros de Castro 2016: 57-58) The “Amerindian epistemological convention” thus follows the principle that “an object is an insufficiently interpreted subject.” (Viveiros de Castro 2016: 62) Could a disappearing glacier, then, reveal itself as a kind of person and actant, powerful enough to create or alter relations of intimacy among the living and the dead? That a person could fall in love with a glacier can hardly be doubted. The more interesting question is: could a glacier return or spurn such a love, and by what tokens, in which temporality? In his 2011 climate satire EisTau, translated into English in 2016 as The Lamentations of Zeno, German novelist Ilija Trojanow casts oblique light on a sharable anguish, at what might be a meeting point of modernist and Indigenous science. Trojanow unfolds the portrait of a glaciologist in mourning for his lost beloved, an “exterminated” glacier. All too aware of planetary change and its social causes, Zeno Hintermeier has slipped into end-Holocene melancholia. He has fled the scene of his glacier’s social murder, and has traded academia for the paradoxes of guiding climate tourists on a regular cruise ship to Antarctica. In one encounter onboard, Zeno shares his “theory of mass hyperthermic cognitive dysfunction,” an ironic attempt to translate his trauma into scientific idiom. Mass hyperthermic cognitive dysfunction is “a syndrome with symptoms that mirror those of hypothermia when overexposure to cold addles the mind to the point that people freezing to death suddenly feel warm and start taking off their clothes. This paradoxical undressing is known as hypothermic cognitive disfunction, and sets in when the body temperature drops below 90°. And while we have scientific proof that people in this state lose their ability to think and therefore to save themselves, I don’t know of a corresponding temperature threshold marking the onset of the hyperthermic equivalent. But it’s obvious that our collective mind is similarly addled, since we keep turning up the temperature on a planet that’s already unbearably hot.” (Trojanow 2016: 94) (GR)

Image: Glacier observation under the spell of several 4000m peaks in Valais. Photographed by GLAMOS, courtesy of ETH Zürich. GLAMOS, the Swiss Glacier Monitoring Network, documents long-term fluctuations in glaciers located in the Swiss Alps. It is operated jointly by Switzerland’s Cryospheric Commission, the Laboratory of Hydraulics, Hydrology and Glaciology (VAW) at ETH Zürich, and the Universities of Fribourg and Zürich. GLAMOS images are secured with support from the Swiss Federal Office for the Environment and the Swiss Academy of Sciences (SCNAT). More on the GLAMOS project can be found here.