Berlin Alexanderplatz filled the apartment with colour from my ancient TV. It seemed like it was going to be another night on the couch. I turned down the volume a bit. The German voices can be overwhelming at times. I wondered if they speak similarly today, or if it just these authentic characters. I reminded myself to keep it in mind on my next journey to Berlin. For some reason, however, I knew that I would forget to do so.

I woke up. It was dark. The TV was off, and my neck was stiff from the couch. In an effortless attempt, I tried to put the lights on. It didn’t work. I disciplined myself and made a better attempt. Still didn’t work. I found a lighter in the kitchen. It seemed like the electricity was off.

As I entered the hall, my thumb started to suffer from the warmth of the lighter. I forgot the pain, as I noticed the front door being open. I stepped towards it and looked into the dark staircase. I started reminding myself, if I ever saw the staircase being this dark. Before even approaching an answer, I noticed that my jacket and shoes were in the middle of the landing. I felt an urge to leave the apartment. Not only the apartment, the whole building.

With a scarf protecting me from the midnight’s wind, my feet incitingly started walking towards the hotel. The first place I went, when I was still a stranger in the city. Maybe I’m still a stranger, I guess it is hard to get rid of that part of once shadow. The hotel had been shut for weeks, however, the owner introduced me to a metal door in the back alley before they sealed the front entrance. I didn’t see a soul on the way. The city seemed to be in a big sleep.

I knocked on the metal door firmly, as I didn’t want to draw any unnecessary attention. F opened the door emotionless, as if my spontaneous arrival in the middle of the night was expected. Without asking me F poured me a glass of vodka, and he refilled the few other guests’ glasses, who all sat in the bar. I had seen some of the others before, yet, a genuine feeling of not conversating had occurred the first time we met. And it didn’t seem to bother any of us, it happened to be more of a relief.

After a few of those healthy glasses, B, one of the other strangers or guests looked at me and said:

“I have been looking for one word for
my poem for almost 4 months now. I
can’t find it. I can’t finish it.”

I looked at him in surprise. Surprised by the fact that he actually spoke, not that I thought he had any speaking disorder or even was mute. No, I was surprised that he needed my advice. Of all the people why did he turn to me? I didn’t even speak the language that well. The most logical explanation, which I could come up with was that he might not need my advice. He simply needed someone to share his frustrations with. He was looking at me waiting for an answer, as my thoughts effortlessly tried to understand the situation.
I looked at him and explained him how some words didn’t develop in some languages, as there had never been a need for them. It sounded more convincing than I thought it would; however, I didn’t know if it was actually true. I read it in some free newspaper on a regional train once. It explained how the Eskimos in Greenland had multiple words for snow, as it were essential for them to know the exact conditions when hunting.

He looked at me, as if the surprised grimace had travelled from my face to his. I just hoped this would not trigger some poetic movement, where the poems would have more empty gaps than a boxer’s smile before the mouth guard was invented.

German voices woke me up in the hotel room, as Berlin Alexanderplatz was still running on the tired screen.

All names have been changed 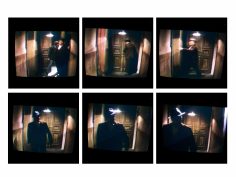