They were living in surroundings of aerodynamic obsolescence, roaming ruins of speed no longer ejected. Drag reduced, friction eradicated, everything conforming to streamline but parked within an Amish parking lot. They dodged each passer-by on the pavement, giving them the respective two meters, hurdling past the puddles of purpose they left behind them as their sense of time dissolved into the bitumen biscuits beneath their feet. For once buildings kept still and became impossible objects, inanimate masks of a show that did its last performance. Props.

It occurred to them when they were running along the bridge on the outer perimeter of the town. It was a part of the highway overpass and cars were hurtling past them as they ran, sending gusts of warm exhaust fumes against the back of their calves. Along the sides of the bridge rose 3.5-meter metallic tubes, varying in thickness but maintained a strict distance of 10 cm apart. They were close enough for you to slide a hand through but too narrow for you to throw yourself into the river. A 70-meter silent plummet, unnoticed as the engines roar above.

As the day’s light was being squeezed out from behind them, their long black shadows were cast in front of them onto the bars. Their shadow flickered across the metal as the tube thickness alternated in front of them. The flicker was fast enough to make the river, the city and the mountains on the other side disappear. Their running pace meant that they could not keep what was at distance in focus and their eyes could only hold onto the nuances of grey of the tubes flashing in front of them. It was the equivalent of watching a film with a projector that was out of synch, moving too slowly, forcing its audience to be and caught within the black space in between the frames. Only at a brisk stroll could their eyes make out the stratified creases of time along mountains in the distance.

They left their apartment the next day just before the shops closed. The sun was being squeezed out for its last appearance, setting ablaze the terracotta-tiled rooftops. They thought of their friend David and how if he was a time of day, this was it. He had a certain tempo whereby you knew that all of his actions were the most natural gestures he could complete within that given moment. No rush, no premeditation, just David, at ease within a time he had assembled for himself, not one imposed. Thinking of this they began to slow down and decided that the only person going to beat them in being the slowest to walk across the plain back home would be the homeless man who had passed out in the half-pipe of the public skate park. So in tune with the speed of his surroundings, 3 hipsters on bikes had to slow down and check his pulse.

It was the first thing that had made sense for the last 3 weeks. The objective was simple: walk as slowly as possible without it being uncomfortable or encumbering. When their ankles became too aware of themselves and they could feel the bones rolling over one another within their sockets, they knew the pace wouldn’t work. Once they had achieved the slowest natural pace, everything felt like a public protest or performance. Muscle memory pulling them forwards. Could the others feel their resistance or see the speed by which they were cutting through space? Without their default tempo did their movements lose their purpose?

They thought of how earlier that week they had recognised someone from across the street, whom they had met once at a party 2 years ago. They could not see their features; their hair was different, and it was wintertime back then, but they were sure they recognised the way their body moved and the time they produced. By changing the speed of their stride, maybe they disappeared like the city, the river and the mountain? Lost within an unsynchronised framing rate, invisible to passers-by and unrecognisable to friends.

What about seeing mountains? Walking slowly caused time to become an extra sensory-perceptual faculty. Like the blind learning to see colour, never before had they been able to feel so discretely the time within people, buildings and objects. The phone repair shop on the ground floor, which brandished the same art nouveau features as apartments above it fostered a feeling of time as clumsy as putting peanut butter in a ham sandwich. The once towering timelines and props everyone had worked so hard to uphold were melting around them, clearing space for new narratives hopefully ones with different tempo, ones with a better view of the mountain. 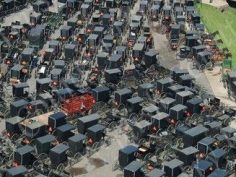