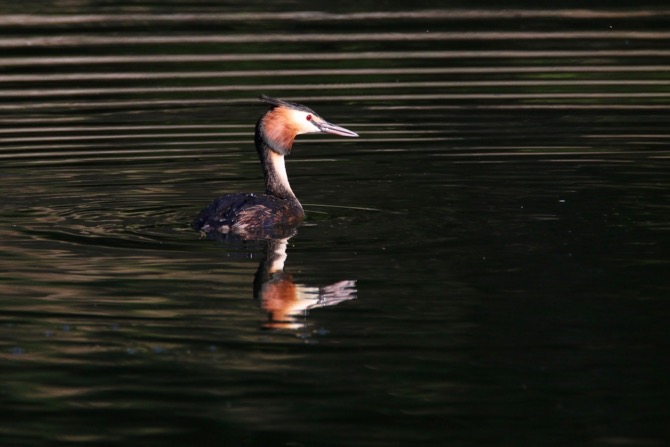 Known especially for its elaborate mating dance, the great-crested grebe (Podiceps cristatus) is a species of migratory waterfowl that can be found throughout much of Eurasia, Australia, New Zealand, and parts of Africa. Lake Geneva is a winter home for thousands of great-crested grebes migrating south from Northern Europe, but the nesting population is much smaller due to a lack of adequate nesting habitats here. During its breeding period in Europe (April to September), the species uses pieces of dry reeds to build floating nests that are anchored to reed beds. The nests are thus able to rise and fall as the water level of a lake rises and falls. Reed beds have almost completely disappeared from the shores of Lake Geneva, however, due largely to an artificial regularization of water levels that does not correspond to the natural cycles of certain water plants such as reeds. The great-crested grebe, though not an endangered species, has nevertheless been impacted in Geneva by the disappearance of its nesting habitat. It has been forced to adapt by nesting in highly concentrated populations in the reed beds that still exist around the lake. A major local population of this water bird can be found at the Pro Natura nature reserve at Pointe à la Bise (Collonge-Bellerive).