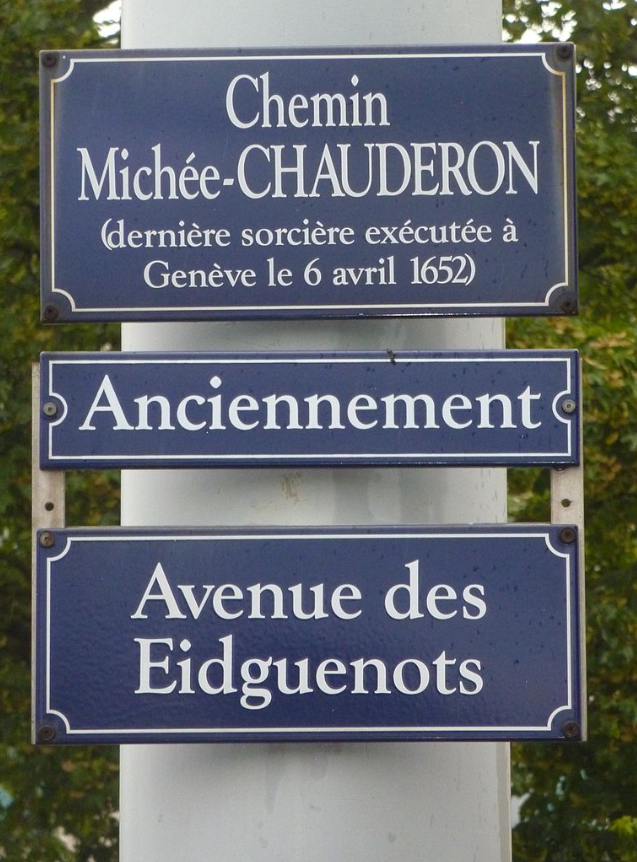 Enclosures is a term elaborated by theorist and Marxist critic Silvia Federici in her analyses of the politics of the commons. In particular, Federici’s contributions to the theory of enclosures extends beyond Marx’s theory of land enclosure and the separation of workers from the means of production, to include women’s bodies, and the devaluation and invisibilization of their labor, specifically reproductive labor, in the transition to capitalism. (Federici 2014) Federici’s theory of enclosures extends to the creation of new enclosures under capitalism, including the enclosure of knowledge commons, but also of physical spaces and expropriation of peasants from their means of subsistence through the enclosure of land. These traces remain in Geneva, whose memory of , the last woman persecuted for witchcraft in Geneva in 1652, is encrypted in a literal enclosure of a dead-end street. On July 2, 1997, the street off Avenue d’Aire was inaugurated by the city of Geneva under the name of Chauderon, a remarkable metaphor of the legacy of her struggle and the treatment of memory by the city and cantonal government. The witch hunts were instrumental in paving the way for new enclosures in Geneva. With the destruction of knowledge of medicinal plants through the hunting of “healers,” the basis for the commercialization of this knowledge into contemporary pharmacies was formed beginning in the 19th century. While visiting Plainpalais regularly for the past six years, I have noticed that the ground is barren and hardened from being paved over, a further example of the erasure of the local entangled history of the purple artichoke and the witch hunts. The purple artichoke continues to grow in surrounding communes of the city, in large monocrop cultivations, in urban gardens in Beaulieu, and as an ornamental plant in parks such as les Bastions or Perle du Lac. It also grows in the medians between roadways and pierces the pavements of a concrete urban context. With it is carried a complex assemblage of histories, an embodied memory of Plainpalais and the history of Michée Chauderon. As the purple artichoke resists enclosures, migrating from northern Africa across socially drawn state lines, to different hemispheres of the world, it is also reminiscent of this continuing process of enclosures, as can be witnessed in Plainpalais in the seventeenth century and in the geography of Geneva today. (Marguerite Davenport)