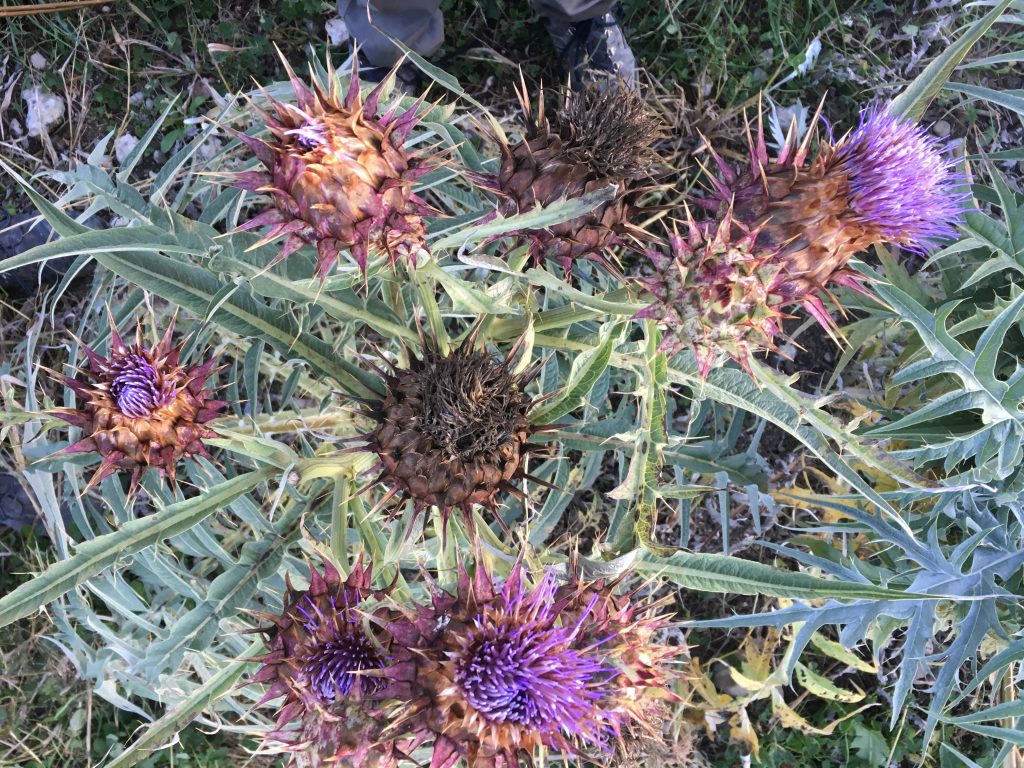 Passed through generations of selection and migration, the Purple Artichoke of Plainpalais has a particularly telling story. Grown and cultivated in Plainpalais, the center of Geneva, by the Huguenots in the seventeenth century, the purple artichoke forms an “assemblage” with the history of the witch hunts that were going on in the same time and place. What could be considered a multispecies ethnography, or more-than-human geography, as researchers Anna Tsing (2015) and Donna Haraway (2016) have written, the story of the purple artichoke decenters the human from its platforms and horizons of progress. Moreover, the story of this plant suggests that the history and archives of Michée Chauderon should be revisited through Silvia Federici’s theory of enclosures; the dominant historiography on Chauderon’s execution for witchcraft in 1652 can be rethought in relation to her role as a healer and herbalist in Geneva and to larger trends of land expropriation taking place in Western Europe in the 15th and 16th centuries. The archives of the verbal proceeding of Chauderon’s case indicate an emphasis on the plants that she had offered to the women who had accused her. The trial makes explicit reference to powders, soups, and peas. Analyses of her case also mention her reputation as a healer, and her work as a laundry and washerwoman who took care of the hygiene of clothing, food, and things in common. Her knowledge and notoriety as a healer using natural remedies and plants was apparently transmitted to her by her aunt in Savoy, where they lived and worked as farmers. The persecution of Michée Chauderon for her practice as a healer was therefore part of broader trend where women were expropriated from “a patrimony of empirical knowledge, regarding herbs and healing remedies that they had accumulated and transmitted from generation to generation, its loss paving the way for a new form of enclosure.” (Federici 2014: 201) The artichoke is therefore a symbolic plant in terms of its placement in proximity to the central site in Plainpalais, where women were burned for witchcraft, but also as a plant that transmitted certain medicinal knowledge between generations concerning sexuality, health, and longevity. The systems of knowledge concerning plants and healing surrounding female practices were, as Federici states, “the foundation of women’s power in pre-capitalist Europe, and the condition for their resistance against feudalism.” (Federici 2014: 103) This case is pertinent to look at through counter narratives, as these trends of land expropriation are still current. (Marguerite Davenport)