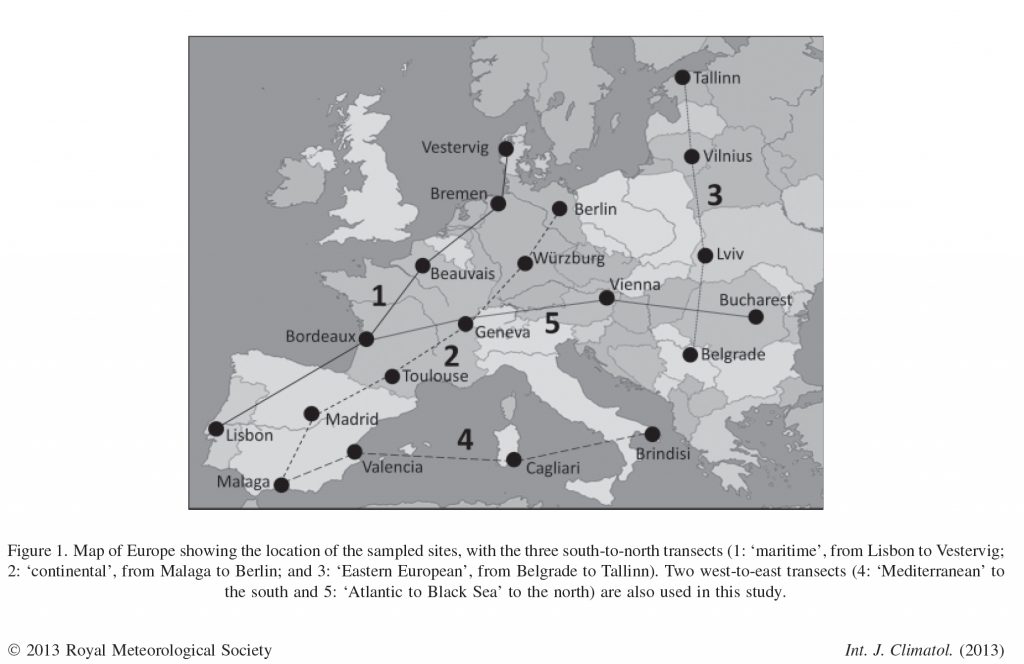 A study led by Geneva climatologist Martin Beniston explored the potential of “climate analogues” to “better portray what a rapidly changing climate means to a lay audience.” (Beniston 2013) His research found that the climate of Geneva today is highly similar to that of Toulouse in the 1950s, while the climate of Toulouse today is highly similar to that of Madrid in the 1950s. We might say, then, that in the last six decades the climate of Toulouse has “migrated” to Geneva, while in that same time the climate of Geneva has moved on to somewhere else. The implications of such movements are immense. The climate, landscape, and flora and fauna of local places have traditionally been fundamental in shaping the special qualities of local human experience and culture. But when climates are displaced, landscapes change, and ecological assemblages are disturbed and transformed, even if cities are largely fixed in place. The speed at which these changes occur will in the future depend on the political and social responses to global warming. But even at the current rate (a northward movement of isotherms by up to 15 km per year), our notion of the local as a stable given of experience is unsettled. As anthropologist Elizabeth Povinelli suggests, the exposure to planetary change in the Anthropocene has made the local “hereish,” rather than emphatically and dependably here. Neither climates nor mobile toxins are contained by human maps, borders, or walls. Such movements and changes clearly also affect nonhuman species and their ecological assemblages, and the problem of granting ethical, political, and legal status and protection to nonhuman stakeholders exposed to socially caused planetary change has become an urgent discussion. Beniston explains his notion of climate analogue in his TAAG interview. (GR)

Image: From the article “European isotherms move northwards by up to 15 km year-1: using climate analogues for awareness-raising,” International Journal of Climatology, 2013. Courtesy of Martin Beniston.